What is your current study as we head into November? The Election? Veteran’s Day? Thanksgiving?

Notebooking Pages has notebooking pages for you! And even better yet, it has FREE sets for all 3. Take your pick and get started on your current events studies. Or do them all. 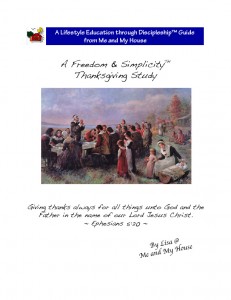 Time to get your ThanksGiving Studies under way. Whether you choose to spend 1 day, 1 week, or this whole month studying about the foundations of this Holiday, as well as the attitude of gratitude, we’ve got a great guide to help you in your studies.

This guide covers what to study, how to study, and how to document your study. Free online resources are included along with great print resources.

Yes, it’s that time of year again. A special time of focusing on Thanks and Giving is just around the corner. I love Fall. I love the Fall Feasts. I love ThanksGiving. For me it’s a special season of honoring God for Who He is and what He’s done, including through our forefathers, as well as a time of digging into His Word on this topic, and reflecting on what He is working in me and my family.

A few years ago I pulled together ideas from our own Biblically principled studies of this topic, into a  study for YOU and YOUR family. It covers both the attitude of Gratitude and the Holiday of ThanksGiving – a study of God’s Word and a study of the Pilgrims, a study of the American holiday and a study of our lives of Thanks and Giving. The book is filled with plenty of ideas for your study. It’s laid out in an easy to use way, AND it is easy to use in the way that best suits YOUR time frame and depth desired. It also walks you down “R Road” of a Biblically principled study.

NOW would be a great time to start this study. Whether you want to do just a little bit here and there, along with your other studies, to get a good understanding before the holiday time, or if you’d prefer to really dig in and give this in-depth attention over the next several weeks. There’s plenty of optional activities recommended to keep you busy as long as you’d like.

Maybe it works best for you to just take a few days right before Thanksgiving to work on this. This works too! A Freedom & Simplicity™ ThanksGiving Study will work for you the way YOU want it to. It’s designed to fit YOU and be YOUR study.

There are a couple of resources listed in it that you may want to order – a good reason to get A Freedom & Simplicity™ ThanksGiving Study now. But you don’t have to buy anything to make this a complete study. The book includes many, many links to free resources you can use to complete the study – and some resources are even completely included in the Appendices of the book. A Freedom & Simplicity™ ThanksGiving Study comes to you as an ebook download, so you’ll have it in your possession within 24 hours of ordering and can get started reading through it and planning your study right away.

Check it out today – and while you’re there browse around our other Lifestyle Education through Discipleship™ resources.

OR – Thank you for reading to the bottom of this post – Subscribers to Me & My House musings, our FREE Monthly Newsletter/e-zine can, for a limited time, get  A Freedom & Simplicity™ ThanksGiving Study at a super discount! If you’re already a subscriber to Me & My House musings, click on over to our secret page for subscribers. If you aren’t a subscriber yet, Subscribe Now, and you’ll get the link when you confirm your subscription.

It’s not too late to order

and choose a few simple activities to add to your Celebration!

This ebook will come TODAY!
You will receive links to download your book to your computer, by email.

Many of the activities suggested are free and easy!
Many of the resources not included in the book are available free online!
Order now to get your FREE BONUS ~ ThanksGiving Journaling Pages
to print out and journal your study.

This summer I listened to a fun and interesting audiobook that your children would probably enjoy. Although we’d already studied the individual earlier in the year, I wanted to take the time to listen to this one when I found it. It proved to be a keeper.

The Boy’s Life of Theodore Roosevelt was written shortly after his death, with the cooperation and approval of his family.

You can download it in audiobook format for FREE from ejunto, a public domain audiobooks site with historical and philosophical works.

This post has been sitting in my drafts for over a month – sorry!

Many times I’m asked what our studies look like. Want to take a peek?

20th Century study – PIPEline link: Me and My House – Focus: The Gates of Hell Will Not Prevail

Term 1 – Turn of the Century

1. Christianity Attacked from Without

3. Christianity Attacked from Within

5. Progressivism in Education and the Arts

Booklists for another day – or another section. Watch our HisStory Resources & Recommendations for book links for the “Me & My House” PIPEline link.

What else for a March Special than our HisStory resources! It builds perfectly on Freedom & Simplicity™ of Lifestyle Education through Discipleship™ ~ The Seminar. (You did remember to get that in February, didn’t you?)

Freedom & Simplicity™ in HisStory and PIPEline of HisStory™ remain our customer’s favorite L.E.D. Exclusives, because they do help you put into action the philosophy and principles taught in The Seminar. (See what they’re saying at the book’s links.) Freedom & Simplicity™ in HisStory is a great introduction to learning and teaching based on biblical principles, for the subject that is the backbone of our curriculum. PIPEline of HisStory™ is a common sense, super easy to use, wall timeline (that can also be made into a early learner’s book, or used as dividers in an older child’s PIPEline Journal.) The PIPEline of HisStory™ will help you put all of HisStory into the context of the advancing of God’s Kingdom and Liberty.

William Bradford’s account of the Pilgrims’ first harvest celebration of
Thanks, in Of Plimoth Plantation

They begane now to gather in ye small harvest they had, and to fitte up their
houses and dwellings against winter, being all well recovered in health & strenght, and had all things in good plenty; For as some were thus imployed in affairs abroad, others were excersised in fishing, aboute codd, & bass, & other fish, of which yey tooke good store, of which every family had their portion. All ye somer ther was no want. And now begane to come in store of foule, as winter approached, of which this place did abound when they came first (but afterward decreased by degrees). And besids water foule, ther was great store of wild Turkies, of which they tooke many, besids venison, &c. Besids, they had about a peck a meale a weeke to a person, or now since harvest, Indean corn to yt proportion. Which made many afterwards write so largly of their plenty hear to their freinds in England, which were not fained, but true reports.

Edward Winslow’s account of the Pilgrims’ first harvest celebration of
Thanks, in Mourt’s Relation

our harvest being gotten in, our governour sent foure men on fowling, that so we might after a speciall manner rejoyce together, after we had gathered the fruits of our labours ; they foure in one day killed as much fowle, as with a little helpe beside, served the Company almost a weeke, at which time amongst other Recreations, we exercised our Armes, many of the Indians coming amongst us, and amongst the rest their greatest king Massasoyt, with some ninetie men, whom for three dayes we entertained and feasted, and they went out and killed five Deere, which they brought to the Plantation and bestowed on our Governour, and upon the Captaine and others. And although it be not always so plentifull, as it was at this time with us, yet by the goodness of God, we are so farre from want, that we of-
ten wish you partakers of our plentie.

O Bradford of Austerfield hast on thy way,
The west winds are blowing o’er Provincetown Bay,
The white avens bloom, but the pine domes are chill,
And new graves have furrowed Precisioners’ Hill!
"Give thanks, all ye people, the warm skies have come,
The hilltops are sunny, and green grows the holm,
And the trumpets of winds, and the white March is gone,
Five Kernels of Corn!
Five Kernels of Corn!
Ye have for Thanksgiving Five Kernels of Corn!

It’s time to make a Thanksgiving MyMini Book of Remembrance (lapbook). What would you put in it?

Order and get started on your study TODAY!

Don’t know what a “lapbook” is?

It is a collection of colorful “mini-books” folded in fun, interesting ways, containing information you’ve learned, and glued into a “shutter-folded” file folder, in a nicely laid-out fashion, for a quick and easy, small and convenient journal of your studies. Learn more about “lapbooks” in my 4 part series on MyMini Books of Remembrance on this blog.

Don’t miss our annual Thanksgiving MEGA-Sale for more Me and My House Exclusive resources!

Whoo-hoo! We’ve been working around the clock on this JUST FOR YOU –
JUST IN TIME for your Thanksgiving Studies!

Announcing the release of

No time to get a webpage for it up right now, but here’s what you get:

a biblically principled study guide of Thanksgiving – both the attitude of gratitude and the holiday. This e-resource covers:

Leading questions will guide you as you reason through your study. Also included are lists and links for highly recommended resources for your studies – both physical books and audios to order and free online resources, and activities for you to complete.

You choose the resources and activities that suit your family and the amount of time and money you want to invest in the study. Reuse it year after year as you expand your wisdom, understanding and knowledge of Thankfulness to God and of the Pilgrims, using different resources and activities. This can be a one day study, a one week study, or longer up to a month to 6 weeks.

Well, more later. I’ve got to get to bed.

You can also get a free Sampler of it (for a limited time).

Don’t forget to check out our Thanksgiving MEGA-Sale!