I just came across this article on 15 Self-Directed Activities for Toddlers. There are some good, fun ideas there to add to the “Educational Tool Box” we recommend in our article on what to do with Toddlers while you’re teaching your older children. (But all these “activities” aren’t necessary -aren’t a requirement for children so young. Plain ol’ play IS their work, and great for all the learning they need.)

In discipling our children one of the things we need to teach them is how to pray. If we don’t, they will be forever stuck in their vain repetitions. Prayer will hold little meaning if they don’t “get it” that we are praying to a real Person – the One who made us, loves us, cares for us. The ONLY One who is powerful enough to help us in all our needs. He cares for us and wants us to talk with Him. He’s always available to listen.

Our Lord has taught us to pray and we can use that to teach our children. But we must beware that this also does not become a vain repetition. Prayer needs to be from the heart.

In our family we have several tools we use to assist our children in learning to pray.

1. I pray around them and with them. They see and hear mama praying all through the day about all things. As I go about my day and something comes up, I pray. When they come to me with a need – or I go to them! – we pray. Whether it be a skinned knee, or a discipline problem, they know God is interested and is there to help.

2. We all pray together as a family. Each one prays aloud during our morning and evening family worship times. They hear not only mama, but also all the other family members praying.

3. We teach them specifics about prayer, from God’s Word. We take note throughout the Bible as to what He teaches about prayer, but we also specifically study His teaching to His disciples when they asked Him to teach them to pray.

4. We utilize Prayer Projects, usually within our morning family worship time. One is a Family Journal of Prayer Requests. In this Notebook (spiral bound or Composition) we list needs as they come up. This may be the needs in our own family, or of friends and neighbors, or others God brings across our path in our community, nation, or world. We list the need and the date, then check it off and date it when the answer comes.

5. Another Prayer Project is our Focused Prayer List of those we pray for regularly. We have a schedule to help us remember to pray for various people and areas of need. The goal is to pray specifically for these things, for their current situations and needs. We’ve used both a simple page in my Redeeming the Time Journal and a more elaborate Lapbook format for this project. (Read more about our Focused Prayer List.)

6. I also teach our children to Journal their prayers. It is such a blessing to go back through these and see what God has brought us through. Our P.R.A.Y. Journals help us in this. We write specifics for 4 areas of prayer, based on the acronym P.R.A.Y.  (Read more about P.R.A.Y. Journals.)

Begin using one of these tools today to help your child develop a meaningful prayer life. Add other tools as the Lord leads you. Don’t feel you have to do all of them all of the time. These aren’t a ritualistic format. They are just tools that help us teach. 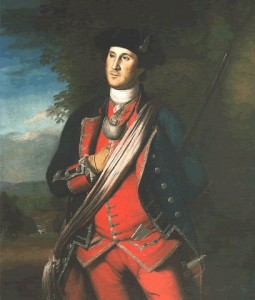 First in War,
First in Peace, and
First in the Hearts of His Countrymen

George Washington truly was the “Father of our Country”. He was a great man devoted to “republicanism and civic virtue”. Sadly, much of his greatness has been forgotten today.

In war he was the Hero of the Monongahela, where “he had two horses shot out from under him, and four bullets pierced his coat—yet, he sustained no injuries and showed coolness under fire,” in the French and Indian Wars. In the War for Independence, he was appointed Commander in Chief of the Continental Army. Even the enemy praised his personal character, endurance, courage and care for the men he was leading. The Delaware River crossing and Valley Forge are just two instances of his heroism in this war.

In honor of George Washington’s upcoming birthday, and today as Presidents’ Day, here are a few resources to help you celebrate by studying his life.

Bulletproof George Washington – a great short account of an event in Washington’s life, and God’s Providential care through it.

Rules of Civility – Washington wrote these maxims when he was 14 years old. They obviously were foundational to the character he exhibited when older. They make great Copywork for our children today.

George Washington: the Character and Influence of One Man – from Washington’s own writings and others in his own time.

Biographies of Washington for youth and children – listed from hardest to easiest.

Want something FREE and today? Download either of the following for FREE today!

CurrClick is offering Presidents’ Day Holiday Helper from Living Books Curriculum, a Charlotte Mason approach. Sign up for their newsletters to know what their weekly free item is.

Homeschool Freebie of the Day has several website links they’ve gathered that would be helpful to home educators studying George or Abe. Be sure to sign up for their email list that lets you know what the Freebie of the Day is for each day in the coming week.

Our copywork for today, the first day of Spring, is a quote about spring from Henry Wadsworth Longfellow, our current poet we’re studying as we study through the 1800’s.

You can download a Copywork page here, so you can copy it today too.

What holds us and our families securely on the path of life?

Genuine faith will always involve reliance upon the biblical Christ. If the integrity of the message about Christ is compromised, children may put their faith in something other than the true Savior—that is, “another Jesus” and “a different gospel” (2 Corinthians 11:4).

Jim Eliff relates our lifeline to a ferry cable that keeps it from being carried downstream.

Consider the importance of that cable, and then think about this: God’s Word is such a cable for our children. If they are ever going to renounce “ungodliness and worldly desires” and follow Christ (Titus 2:12), they must hear the truth. We must apply what the Apostle Paul makes lucid through a series of questions in Romans 10:

Faith depends upon the facts of Christ’s saving work. As parents, grandparents, pastors, and teachers of children, we are obligated to make these facts as clear as possible. A child’s real understanding of the gospel is in God’s hands (cf. Romans 9:16), but our children cannot believe unless they hear the truth. They should grow up breathing biblical air!

Last week’s studies brought us to the hymn writer lauded by some as the last great American hymn writer who wrote hymns based on the Sovereignty of God and to His glory alone, Ray Palmer.

The hymn we learned was already known to me. It’s richness touches the soul that loves God. Read more about it here, where I’ll be weekly blogging on the Psalms and Hymns we study as a part of the Saturday Psalm and Praise meme.

What things are really imoprtant to study? What do our children really need to learn well? What facts do they need to remember?

In deciding what to study these are questions I look at:

All facts we need to remember should fit within one of these categories.

Yesterday was a cut and paste day. I planned it as an activity to keep the younger ones occupied and engaged, but all the older ones decided to do their pages this way too, after their copywork and word studies.

We did a T-chart of G.O.D. – God’s Original Diet™ foods, and S.A.D. – Standard American Diet foods. I drew a little smiley in the middle of the ‘O’ and turned the cross-bar of the ‘A’ into a frown and put eyes in it, to help our little non-reader boys remember which side to put the pictures on.

It took me forever to get clip art pictures (since we have no magazines or newspapers on hand with food pics.) But once I printed them out, they had a blast.

We had just reasoned the G.O.D. foods from Genesis 1:29, so all they had to do was put anything not included in that on the other side. They were all very pleased with their Journal page, and the little ones showed them to the couple of visitors we had last night.

I don’t believe good nutrition is based on “food products”. So why am about to recommend a food “product”? … See my from me blog to see why.

What does this have to do with L.E.D.? This is our “off-week” (in between topical studies) and I am refreshing the children – and expanding their understanding – on nutrition.

I’m blogging everywhere and there but here this week. So I figured I’d share a bit of what we do on our “off weeks”. This week is the last in our term. We run a 6 week “on”, 1 week “off” schedule, though not dogmatically. If we need to continue to finish things up we do, if we finish before the 6 weeks, we moved on.

Anyhow, our “Sabbath” rest weeks aren’t really rest, nor are they really “sabbath”, as in devoted wholly to seeking God in the Scriptures – but we do continue our family worship times. Our “Sabbath” weeks are our one week “change in routine” we take between each term. I got the idea LONG ago from Teri Spray of Christian Cottage Curriculum, at a CHEC conference.

On our break week we focus on learning Life Skills rather than “book learning”. It may be on cleaning and organization – whether that means learning to clean something, or digging in and tackling a project. It may be cooking or baking skills or menu planning. It may be sewing or craft skills.

When we had a garden and bought cases of fruit to put up, there was always a week of canning and freezing and dehydrating. When we did Mega-Menus we put up 6 weeks worth of meals in the freezer during this time. For the boys it might be helping dad with a remodeling project. For next week it will be finishing tanning their deer hide – and probably raking all the acorn caps out of the yard! I also plan to take some more specific, prolonged times to help dd so-close-to-16 to work on her driving skills.

Sometimes this off-week is also devoted to special help in Learning Skills – such as, if someone is stuck on a math concept and they just need extra help over the hump. Or if we’ve slacked in working on spelling or editing-of-our-writing skills, we’ll do some catching up.

It’s also a week we try to throw in some extra fun things. Play some games, perhaps go to the Children’s Museum or other “special place”. I thought we were going to be going to Omaha – but 2 wrenches got thrown into that idea. We’ll have to come up with something else. (And Omaha will end up taking a day out after we get back to our “normal” routine. — Is there really such a thing?)

What do you do to “change things up” – to keep from getting in a rut, or take a break from the “normal” – at your house?