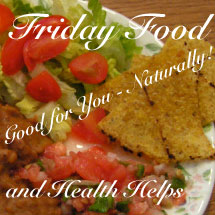 ‘Tis the season. Apples and pumpkins are 2 of my favorite fall crops. Raw pumpkin is yet to be tried here, but we love Good for You-Naturally!™ Pumpkin Bars, Pumpkin Muffins, and of course, Pumpkin Pie.

When it comes to apples, we never run out of ways to serve them – from fresh apple juice to apple crisp, and of course, apple pie. For a very special treat, there’s Caramel Apples. Very special, but still very Good for You-Naturally!™

Good for You-Naturally!™ Caramel Dip
for Apples and other Sweet Treats

Soak in distilled/purified water to cover. (At least 1/2 – 1 hour.)
Drain – but save soak water.
Add to dates:

Blend all in a food processor (or high performance blender) until smooth. Add enough soak water to make it nice and creamy. 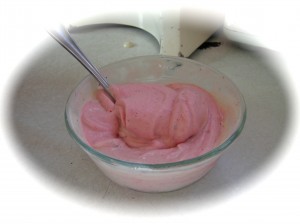 Na. It’s Nice Cream! Made quick and easy from frozen bananas and strawberries in my Champion Juicer! Mm-Mm GOOD!

Psst! We’ve got a Special Holiday Offer on the Champion right now. Get yours today and start making not only great tasting and Good for You-Naturally!™ nice creams, but also real living food nutritional supplements (a.k.a. fresh raw fruit and vegetable juices) and so much more! This is the piece of kitchen equipment I say is far more important than a stove.

This is a great change of pace salad, and super simple to make. I served this salad at a church dinner recently, and was asked to post the recipe.

2 small to med. organic oranges (peeled, sectioned, and cut in half)

handful of organic raw almonds (whirred in the blender, into bits – don’t whir too long or you’ll have almond butter)

Toss together with Dressing. You may want to reserve a few almond bits to garnish the top.

(This was enough dressing for my salad. If your salad is much larger, you may need to double dressing ingredients.)

Quinoa (keen-wa) is an awesome grain. It’s a whole grain, Good for You, and cooks in only 20 minutes (rather than the 1 hour plus of most other whole grains.) My children call it fish eye-balls because it is a small round grain that forms a little spiral when it cooks. For a quick, Good for You, wholegrain dish that tastes delish try:

I cook this in my Miracle brand electric stainless steel rice cooker. Other ways of cooking it may require different proportion of water. Most stovetop recipes say twice as much water as quinoa.

When both are finished, mix together and serve with a big leafy green salad. The 4 cups of dry grain makes more than enough for our family of 8. As our boys get older, we’re having to prepare bigger batches of everything. 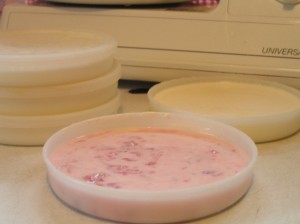 Here’s how I did it.

Dump water out of yogurt containers and pour yogurt in. I used the containers that work in my dehydrator since that is where I cultured my yogurt this time. You can use a quart glass jar or smaller glass jars or a wide mouth glass or stainless steel thermos. Put lid(s) on.

Put in warm place to culture. You need a place that will keep a steady temp of 95-110°F. As I said, this time I used my dehydrator, that has a thermostat control on it. Culture 8-10 hours, until it sets up. Other ways you can culture yogurt are listed in a previous post on yogurt that has complete instructions and various uses.( I DO NOT find a crock pot, even on keep warm with the lid off to hold a low enough temp.) More yogurt posts here.

My additions for flavored yogurt per serving – all optional. Add 1 or more. (adjust amounts to your liking):

OK,  you do need a source of raw goat’s milk for this. You can substitute raw cow’s milk if you have a source/use cow’s milk. (I recommend not, but raw IS SO MUCH better for you than pasteurized, homogenized, chemically, feed-lot raised, …)

OK, this is really called GOOT* but in my book/house it is GOCO and it is good for what ails you. It has all the great health benefits of its ingredients – garlic, olive oil and VCO (organic extra virgin coconut oil). It is anti-infective, anti-viral, anti-parasitic, anti-fungal, anti-all those bad microbial things. 🙂 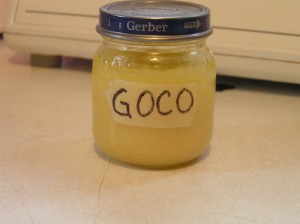 GOCO Salve – good for what ails you

Basically it is equal amounts of the 3 ingredients, blended together in your blender/food processor. Rub it on chests, feet, sinuses, in noses, in ears. Great for colds, flu, athlete’s feet,  – “whatever ails you”!

The recipe is 3 Tbl. of each. Melt your VCO. Blend your garlic with the oils – blend it up good. Put it in a jar.

Here’s how I did it:

Measure 3 Tbl. VCO into a small glass jar with a wide mouth. (Thanks Angie for the baby food jars! They are coming in handy.)

Pour very hot water into a small bowl. Set jar of VCO in the bowl of hot water to melt the VCO. NEVER microwave VCO.

Mince fresh garlic with garlic mincer/press. It’ll take approx. 3-4 heads to get 3 Tbl. I got about 1 Tbl. per head of garlic.

Put melted VCO, minced garlic, and 3 Tbl. olive oil into food processor (or blender.) (3 ingredients, 3 Tbl. each – easy to remember recipe!) Process until garlic is very fine, and mixed in.

Let set out on the counter for a few hours – to really infuse those oils with the garlic. I then refrigerated it (as I think you’re suppose to). But I keep it out of the fridge when actively using it – fridge makes it TOO hard, IMO.

More info at Jacque’s website, where I got the original recipe. [website no longer available] We’ve used fresh garlic, and garlic/olive oil for years, but are new to the addition of VCO and its great health benefits added to these. I’m glad to have this, but not hoping we get to try it out soon.

Another request from Lisa. And another that works great in the crock pot.

Cook until veggies are soft.

If made in a stock pot, transfer to casserole dish or 9×13. (If made in crock pot, you can leave it there.) Top with Biscuits. To serve place biscuit on plate (we slice them in half), then ladle veggies on top of it.

We always make lots of extra biscuits to eat with butter and all-fruit (no sweeteners or additives) jam, with this. Also a nice green veggie salad.

A friend asked for this recipe this week, so here it is. (Just for you Lisa.) But Friday is quickly running out – and so am I, with another busy day tomorrow, so… this will be my regular-way-of-cooking instructions, i.e. no precise measurements.  🙂 We eat this either thickened, and served over mashed potatoes, or thin as chicken noodle soup.

Cook a whole chicken – either in crock pot over night or in boiling water on the stove. After it’s done, because we get really big tender (organic) chickens, I can usually remove the breasts for use in another meal. I de-bone, de-skin and shred the rest back into the broth. (In the crock it will just be the juices, so better for thick chick ‘n noodles – but either way works.)

Add a diced onion, a few stalks of celery chopped, a couple carrots – chopped or shredded. A small handful of dried parsley (approx 2 Tbl. or so) and about 1 tsp. dried basil. You can also add a couple of cloves of minced garlic, especially if you’re fighting colds and such. Add water to cover and simmer.

Make your noodles – recipe for whole wheat egg noodles another day. We make ours thick and wide – chewy, like dumplings.

If you cooked the chicken in the crock pot, add more water to the chicken and veggies, plenty to boil the noodles in. Bring water to a boil. Add your fresh noodles. The flour left on the noodles when you put them in to cook will help thicken it up. If your broth is pretty weak, add other broth or soup stock instead of water, or a couple of Rapunzel vegetable bouillon cubes.

After the noodles are cooked, you can shake up some (whole wheat) flour in a bit of cold water and stir it in to thicken the broth up more, for serving over mashed potatoes. If making it for soup, use plenty of water/broth, and leave it thin. We usually also add peas, especially if serving it as soup. (2-3 cups maybe) I don’t cook them in it all day (don’t like dull, mushy peas) but rather add them 15-30 minutes before serving. Add salt and pepper, as needed.

If making thick Chick ‘n Noodles you can do this instead: Boil your noodles in a separate pot of water, with a smaller amount of water in your chicken and vegetables. Add your noodles to the chicken and veggies after they’ve cooked, and enough water to barely cover, bring to a boil. Then thicken this broth.

Enjoy on a chilly night with homemade whole wheat bread, and carrot/celery sticks.

Another snack recipe this week. This is a Good for You-Naturally!™ Carmel Corn that you can also make popcorn balls out of.

Pop 1/2 c. popping corn. (Stove or air popper, plain popcorn, not micro-wave.) Put in large bowl, and set aside while you make the carmel.

Bring to a boil (on the stove):

Boil 5-6 minutes (until soft ball stage, if you have a candy thermometer).

Stir real well. It will foam up and change color. Pour over popped corn and stir well to coat evenly.

Spread out in jelly roll pan (I use large stoneware bar pan).

Stir as it cools, or form into balls as soon as it is cool enough to handle but still warm enough to stick together.

Mix together well in an 8-9″ square or round stainless steel or glass cake pan.

Make a depression in the center of these dry ingredients, and pour in:

Mix these liquid ingredients all together well (in the depression you made) before combining with the dry ingredients. (Of course, you can dirty up a mixing bowl instead if you want.)

“O taste and see that the Lord is good.”