Since this is timely, I’m adding it today too, rather than waiting. Genetic Roulette (full length documentary) is also available to view online for free until Nov. 6th. Get informed.

Monsanto has long been trying to establish control over the seeds of the plants that produce food for the world. They have patented a number of genetically altered food crops, which can only be grown with proper license, and the seeds for which must be purchased anew each year.

Alas, genetically engineered (GE) crops cannot be contained. And rather than being found guilty of contaminating farmers’ property, Monsanto has successfully sued hundreds of unsuspecting farmers for patent infringement when unlicensed GE crops were found growing in their fields. Many farmers have subsequently, quite literally, lost their farms.

Percy Schmeiser of Saskatchewan, Canada, is but one of Monsanto’s victims, but contrary to so many others, he refused to quietly tolerate the injustice. In a classic case of David versus Goliath, Schmeiser fought back against one of the most powerful businesses in the world.”

Read the rest of the article here

Again this year, Dr. Oz interviewed both sides on GMO’s.

Dr. Oz on GMOs. Must watch!

Before interviewing Jeffrey Smith and Dr. Robin Burnhoft about the health dangers of GMOs (part 1), Dr. Oz revealed that the pro-GMO scientists invited to his show were unwilling to share the stage with Jeffrey. They would only appear after Jeffrey and Dr. Burnhoft finished their interview and walked off. The reason for this demand became immediately obvious when Martina Newell-McGloughlin spoke to Dr. Oz. So much of she said was demonstrably false or misleading. Click  to watch this episode. http://www.doctoroz.com/videos/genetically-modified-foods-are-they-safe-pt-1

October is GMO Awareness month! How aware are you of what is in what you put in your mouth and how it was grown and processed? I believe this issue goes far beyond just GMO’s (genetically modified organisms – or GE’s, genetically engineered “foods”). But GMO produced “food”-products are certainly the new danger of our age, as these un-natural Franken-foods came on the scene in 1996 and have continued to spread like wildfire since then.

When our “foods” are produced in a chemical lab by men in white coats and patented, there is something seriously wrong with the system, and a great threat is presented to our health. And yet much of our society goes on oblivious to the facts because it “tastes good” (has been laden with strong chemical flavorings to mask the true tastelessness), “we love it and want more; eat it all the time” (because it’s been laden with addictive chemicals), and it’s “cheap” or cheapER (because the government has taken money from the people on the front end to subsidize these “foods”. People, we are paying for these “foods”, a very high cost, whether we buy the finished “food”-products or not.)

What is food? It is not whatever can be put down the gullet with relative ease that tastes good and doesn’t cause an immediate death reaction.

Food (Webster’s 1828 Dictionary) = whatever is eaten for nourishment, something that sustains, nourishes

Nourishment (from 1828) =  1. That which serves to promote the growth of animals or plants, or to repair the waste of animal bodies; food; sustenance; nutriment. 2. Nutrition; support

Nutrition (from 1828) = 1. The act or process of promoting the growth or repairing the waste of animal bodies;  2. That which nourishes; nutriment.

Health (from 1828) = That state of an animal or living body, in which the parts are sound, well organized and disposed, and in which they all perform freely their natural functions.

These Franken-food products do not nourish, do not sustain health, do not promote growth and repair and the health of our bodies. But they “look good to our eyes, taste good (to our tricked brains), and we want them. In our pride, we think we “surely will not die”.

Man, in his attempt to be god has perverted the good food God has given us. By his patents (and unethical lawsuits) he attempts to control not only nature, but also all of mankind (through what he eats). Brethern, this ought not be so. Our society is the frog in the kettle, the drugged mass following the pied piper. We must wake up and return to the real food created by the Creator of our bodies to nourish and sustain them.

To learn more about genetically engineered foods and their effects, see other posts in this category (past and future), and check out the Institute for Responsible Technology and other science sites concerned about GMO’s. IRT has an article on 10 Reasons to Avoid GMO’s here.

It’s GMO Awareness month – or is that NON GMO Month! Watch for more articles this week.

A late-breaking study shows that genetically engineered (GE) crops have led to a 404 million pound increase in overall pesticide use from the time they were introduced in 1996 through 2011. This equates to an increase of about seven percent over the last 16 years.

The report, published in the journal Environmental Sciences Europe,1effectively undermines the declared value of crops genetically engineered to be protected against herbicides and insects. The whole premise for GE crops was to make it easier to kill weeds and diminish crop loss to harmful pests.

But instead, these modified crops have led to resistance, both in weeds and pests, leaving farmers to struggle with an increasingly difficult situation. More than two dozen weed species are now resistant to glyphosate, the primary ingredient in Monsanto’s broad-spectrum herbicide Roundup.

Dr. Mercola
read the rest of the article here
This Food May Expose You to 31 Times More of This Chemical Found in Agent Orange

Our list of GMO (and other food) videos we’ve watched to date this fall. We have watched many. Some were more interesting than others, some included the same interviews as others, some were done better than others, some were idealized, most don’t have a Biblical perspective (only 1 we’ve watched does) so their conclusions lead to agendas (politically or environmentally) that we are not for. We certainly don’t agree with everything presented in all of these. But all expose evidence and the dangers of genetically engineered organisms, which we believe we have both health reasons and Biblical reasons to avoid and educate on. Therefore, they are worthy of watching. Apply a Biblical principled perspective and you will learn much and be able to make appropriate responses, beginning in your own kitchen, by avoiding eating genetically modified foods. (Some of these videos are not specifically on GMOs, but are on other dangers in food production/processing and/or the food and health relationship.)

We’ve been able to watch all of these for free online – most through Netflix streaming, YouTube or Vimeo. But before the movies, the first is a talk show interview on GMOs. The second is an audio of a presentation given by sustainable farmer, Joel Salatin.

Dr. Oz Investigates Genetically Modified Foods – in this 3 part video Dr. Oz interviews those both for and against GE foods.

Food: The Cornerstone of Christian Credibility – audio given by Christian farmer, Joel Salatin, at Patrick Henry College  (you’ll see him featured in Food, Inc below)

Food Inc – (Netflix) a great first video to watch, although not strictly about GMOs, about the industrialization and politics of food.

King Corn (Netflix) – The children enjoyed this one. The story of 2 city guys who decide they want to experience being corn farmers and learn how corn grown in Iowa ended up in their hair (hair analysis.)

Fed Up – (Netflix) explores the various food production systems of the US, uses old movies clips to add to the entertainment factor.

The Future of Food  – free online, also at YouTube and Netflix – documentary on biotech and politics

The World According to Monsanto – documentary on who Monsanto is and what they are doing.  (More videos listed below this video.)

Food Matters – (Netflix) the relationship between food and health

Ingredients – (Netflix) bringing food production back to the sustainable, local farm, and good food back to the table.

Fat, Sick and Nearly Dead – (Netflix) another that isn’t GMO, but this one was all our children’s favorite. The story (there’s the appeal) of a man who learns of the relationship between food and health and goes on a fresh juice diet and travels the country, while he’s losing weight and gaining health, and the people he meets along the way.

Jeffrey Smith’s organization, Institute for Responsible Technology, provides much information on GMOs, including basic facts for understanding what they are and how they work, in addition to their dangers and what to do about them. This article may be a good place to start there. 10 Reasons to Avoid GMOs

Continuing our links to movies about genetically modified foods. Everything you Have to Know About Dangerous Genetically Modified Foods is by Jeffrey Smith, one of the leading voices on GMO research. (See our other blog posts about him and GMOs.)  You are able to watch this video in its entirety through Vimeo, embedded below. I’ve also included below the first segment of another of Jeffrey Smith’s videos from youtube, Hidden Dangers in Kids’ Meals. You can also purchase these and other videos, as well as Jeffrey’s book Seeds of Deception, on Jeffrey’s site.

Everything You Have to Know About Dangerous Genetically Modified Foods
This video doesn’t just tell you the dangers, but also what we can do about it, without relying on more government regulation.

Everything You HAVE TO KNOW about Dangerous Genetically Modified Foods from Jeffrey Smith on Vimeo.

Want to avoid genetically engineered foods and ingredients? This free downloadable shopping guide (or iphone app) will help. Download the Non-GMO Shopping Guide or get the ShopNoGMO app in the iTunes app store. 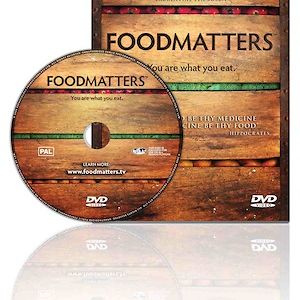 Today I’m sharing part of a post that I’ll put up later this week. This one needs to be acted on this week, so I wanted to give you as much time as possible to fit it in. Food Matters has put their full length video up on their website to view for FREE this week, for GMO Awareness. You can also watch it on Netflix streaming anytime.

Watch the trailer below – click on the picture or link above to watch the full movie.