I love sewing. I love antiques. Add the 2 together and you have a love for antique/vintage sewing machines. I particularly love the beautiful black, curvy ones, that classic shape of the early 1900’s Singers with black “japanned” paint jobs. Owning an old black treadle machine has always been a dream of mine, particularly a “red head” (red decals). Last year that dream began to take shape–in several steps.

In a spare bedroom at my dad’s sits a treadle. Last year I told him, if it hadn’t already been promised to someone else, I’d like to have it some day–and I’d like to come look at it. When we opened it, we were surprised to find not a treadle machine, not even one that had been converted from a treadle. From my research, I found it to be a 1948 Singer 201-2, a machine that I’d love to (and will) own, even if not a treadle. I’ve already named her Pamela, after my sister who died as a baby in 1948, and since she is coming from my dad. 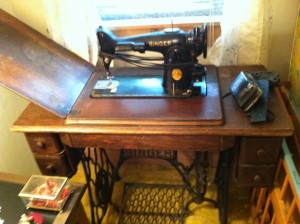 When I told an older lady how excited I was about that, she asked if I’d like to have her grandmother’s machine. Would I?!!! I’d seen it’s bentwood case in a spare bedroom at her house. It was time to find out just what was inside. A 1922 White Family Rotary that had originally been a treadle, but great grandma had put a swing-away motor on it and put it into the bentwood case, making a–very heavy–portable. I had to name her Betty! since she is a White and was “born” in 1922. 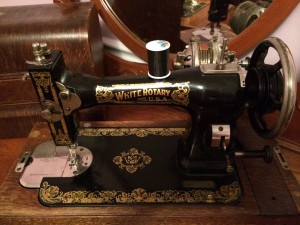 Since I now had a sewing room that was not also someone else’s bedroom or the schoolroom or playroom, or a hole in the wall in the attic, I started looking more actively for the treadle machine. By now, having studied enough about old sewing machines that I could identify many, Singers at least, I had a growing appreciation for old machines other than treadles. Although I’d looked at many–many times–nothing was ever quite what I was looking for, nor at a price I was willing or able to pay at the time. That treadle, that just surely called my name, never appeared.

decided to pour out an abundance on me–all within about 48 hours.

Last week, I found a machine on Craig’s List, about 100 miles away. It wasn’t a treadle, not even in any type of cabinet or case, but it was only $15 and they said it worked. It was also the only other model Singer made with the same motor as the one on dad’s machine–that didn’t work.  I figured if the motor worked, even if I didn’t like the machine, or it didn’t run, I wasn’t out anything. They were right. She worked beautifully. Just needed a bit of cleaning–and probably some sort of case would be nice. I was now the owner of a 1952 Singer 15-91. I named her Louise, after my sister’s middle name, who was born in 1951 (close enough,) and passed in 1965. 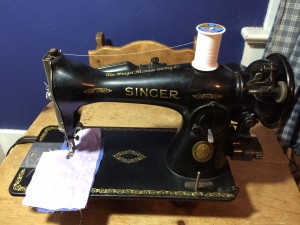 The next day, I ran into a friend. She had noticed my old sewing machine posts, and told me she had one in her garage if I wanted to come look. If I wanted it, we could set up a trade (for essential oils). She didn’t know if it was treadle or not. It was buried in their garage. No treadle. But a cute little 1956 99K in a cabinet. I decided to take it, clean her up and see what she’d do. I had to name her Roxie Anne. 🙂 She came from a Roxanne, Anne is the 5th top name in the 1950’s, in Scotland where this machine was made, and my middle name. 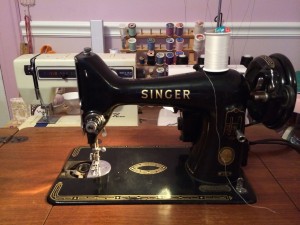 Not 24 hours later. I received a phone call from my dad’s wife’s daughter. She’d been talking to my dad and he told her about my machines. She has her husband’s grandmother’s machine. She doesn’t sew or have room for it, and no daughters or daughter-in-laws to pass it on to. She’d love to give it to me. It’s a…

1929 Singer 66 TREADLE! Never been converted to electric. Works. And… I just “happen” to be going that way–in less than a week.

Do you have an old sewing machine? Is there one you want?